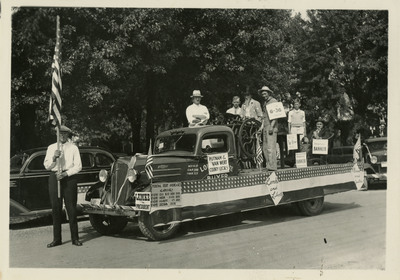 A Lemke for President float from an unidentified parade in 1936. North Dakota Congressman William Lemke campaigned for President with the Union Party in 1936. Signs on the float indicate that "Putnam" and "Van Wert" are local candidates, while another sign brings attention to the rising federal deficit. An "International Banker" rests comfortably in a chair at the far end of the float.