Chit Chat with a Senator 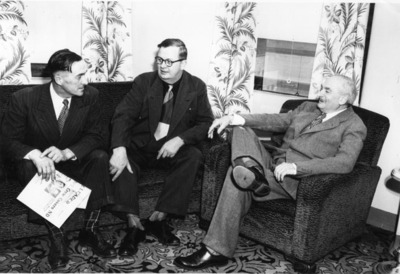 Irwin Schumacher (left) and Howard Henry (middle) converse with United States Senator William Langer. Schumacher, a resident of Drayton, North Dakota, is holding a copy of the Nonpartisan Leader. "Wild Bill" Langer served as North Dakota Governor from 1933 to 1934 and from 1937 until 1939. He was elected to the United States Senate in 1940 and served until his death in 1959.