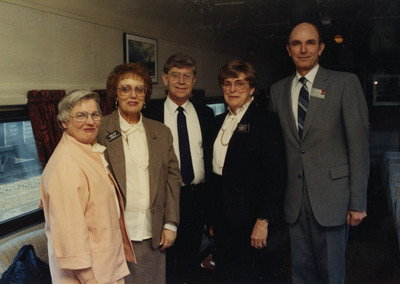 Snapshot of three legislators attending an event sponsored by the Burlington Northern Railroad in March 1989. Dagne Olsen (second from left) represented Manvel in the North Dakota House of Representatives from 1981 until her death in 1994. Alice Olson (second from the right) was elected to the North Dakota House of Representatives in 1972 and served for 26 years, until her retirement in 1998. Don Shide (far right) served in the House for seven terms. All three were members of the Republican party. The other two people in the photograph are unidentified.