District 19 Hard at Work in the Legislature 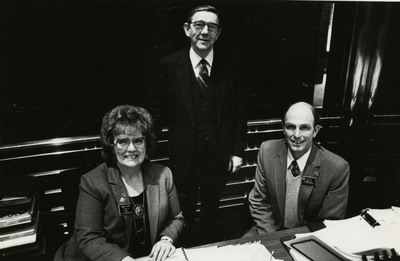 "Rep. Dagne Olsen, Sen. Duane Mutch and Rep. Don Shide back at work in the legislature." (from back of photograph)

Representative Dagne Olsen represented Manvel in the North Dakota House of Representatives from 1981 until her death in 1994. Duane Mutch served two long terms in the North Dakota Senate, the first from 1959 to 1976 and the second from 1979 until his retirement in 2006. Don Shide served in the House for seven terms. All three were members of the Republican party.