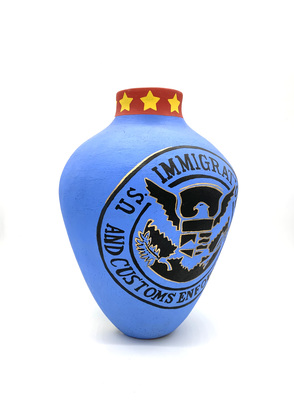 This piece is by the artist entity CRANK who uses traditional Native American vessel forms and red earthenware clay that are then painted with underglazes including 18 karat gold highlights to create pop-culture motifs. These sculptures explore wide-ranging concepts such as ownership of open source material, cultural appropriation, immigration, sexual orientation, consumerism, and pop music. This work features 90s rapper Vanilla Ice on one side and the US Immigration and Customs Enforcement (ICE) logo on the other side, hence the name "Ice Ice Baby," as well as Americana stars and ribbon of polka dots on one side. It's a very timely work considering everything going on the border, at once humorous and heartbreaking. The work explores notions of falsehood, cultural identity, and the U.S./Mexico border.

CRANK, born on November 22, 1963, the day of John F. Kennedy’s assassination which coincided with the death of American innocence, is an outlier, a miscreant, a genderless artist entity that is not necessarily human. CRANK absorbs pop culture, current events, world history, literature, music, and the art market to create works that grab the viewer by the collar. CRANK’s mash up of contemporary American consumption - cultural icons, corporate logos, and sculptural shape - creates narratives that question the idea of ownership in a combination of past, present, and future. Every element of a CRANK work including the title, price, form, and content remains essential to the work itself, acting as a cue to the works’ layered meaning. CRANK attempts to flip notions of control and without a concrete identity, CRANK becomes the game itself rather than the player in both the art market and society at large. With recent acquisitions from well-respected curators and institutions including the Heard Museum, CRANK has garnered critical praise in a very short time for describing life in the twenty-first century.