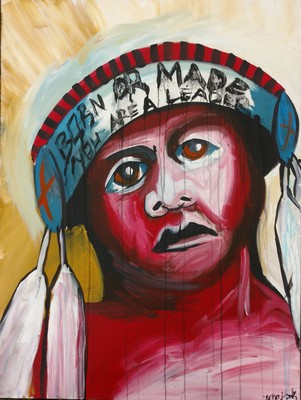 "Bunky Echo-Hawk was born in 1975 in Toppenish, Washington. While he is an enrolled member of the Yakima Nation of Washington State, he likes to point out that his heritage also descends from the Pawnee Nation of Oklahoma. A graduate of the Institute of American Indian Arts in Santa Fe, Echo-Hawk is a visual artist, graphic designer, photographer, writer and nonprofit professional-as well as a traditional singer and dancer.

Echo-Hawk endeavors to employ art as a means to advance the lives of Native American people. He defines himself as a "proACTIVE ARTist," whose goal is to "truly exemplify the current state of Native America." By merging popular culture with Native customs, Echo-Hawk's art also challenges assumptions and notions about American Indians and the issues that affect them.

Echo-Hawk's work has been exhibited through the United States, including New York; Chicago; Washington, DC; Denver; and Santa Fe. Internationally his works have been shown in Frankfurt, Germany, and London, England. A co-founder of Vision (a nonprofit collective of Native American artists, musicians, community organizers, and nonprofit professionals focusing on Native American youth empowerment through multimedia arts), Echo-Hawk currently serves as its executive director."

Painted live in front of an audience at the University of North Dakota Leadership Conference on February 22nd, 2014.