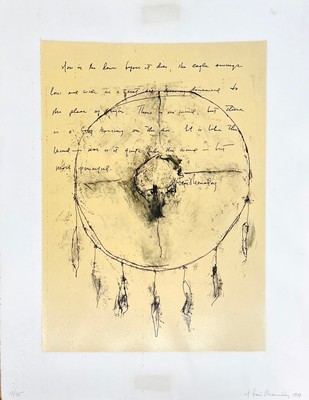 Navarre Scott Momaday is an acclaimed Kiowa novelist, short story writer, essayist, and poet. He was born in Lawton, Oklahoma and grew up in Arizona and New Mexico. Momaday attended the University of New Mexico where he received his Bachelor of Arts in English in 1958 and continued his education at Stanford University where he earned his Ph.D. in English Literature in 1963. He has also recieved twelve honorary degrees from several American universities.

Momaday has received the Pulitzer Prize for Fiction for his novel House Made of Dawn in 1969, which is also credited as being the first written work of the Native American Renaissance. In 2007, for his work which has served as an embodiment of celebration and preservation of Indigenous art and oral tradition, he received the National Medal of Arts.

Depiction of a dream catcher in front of text.