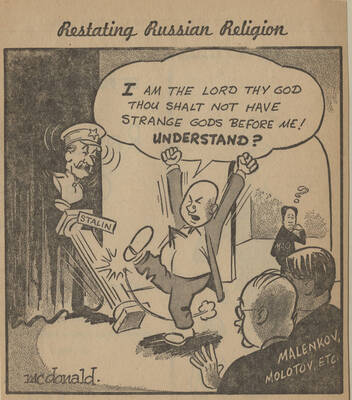 Cartoon depicts Premier Nikita Khrushchev kicking over a statue of Joseph Stalin saying "I am the Lord thy God thou shalt not have strange Gods before me! Understand?" Watching on the side are members of Congress, "Malenkov, Molotov, Etc," and Mao Zedong in the background with a question mark above his head. In Nikita Khrushchev's speech to the 22nd Congress of the Communist Party in October 1961, he denounced Joseph Stalin's "mistakes" and his "cult of personality."