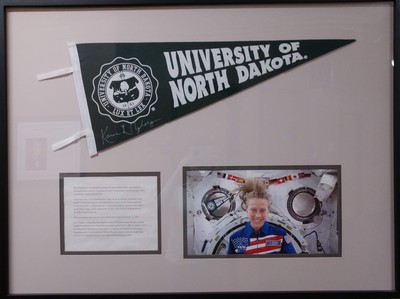 This UND pennant, accompanied by astronaut and alumna Karen Nyberg, was on board the International Space Station for Expeditions 36 and 37. It was launched into orbit on June 5, 2013, and returned to Earth on May 18, 2014.

The pennant's trip to the International Space Station was on the European Automated Transfer Vehicle ATV-004 Albert Einstein, which launched from Kourou, French Guiana, and docked with the ISS on June 25, 2013. It returned to Earth on the American commercial cargo vehicle SpaceX CRS-3 Dragon. which undocked from the ISS on May 18, 2014, splashing down in the Pacific Ocean the same day.