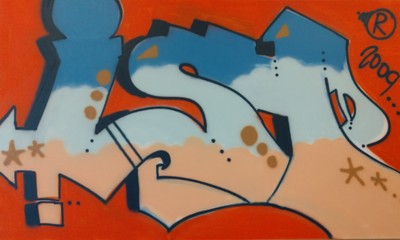 Raised in New York City, Rich Patterson became a member of a graffiti gang and became well known as an "outlaw" artist during his early life. In 2002, however, he came to UND to earn a degree in education. After graduation, he became a kindergarten teacher in North Carolina.

The large spray painting was executed for the University's former Integrated Studies Program, which is why it contains the letter ISP. The style of the artwork bears resemblance to the graffiti that Patterson previously spray painted on subway trains in New York. Now, however, it has been transformed into fine art on a stretched canvas.