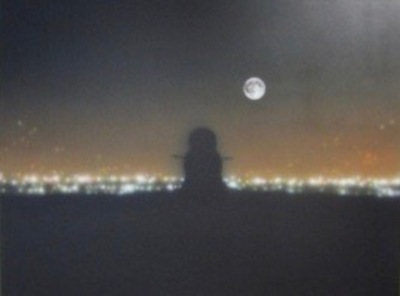 Todd Hebert (UND alum class of 1996) was born in Valley City, North Dakota. After receiving his BFA at the University of North Dakota, he earned his MFA from the Rhode Island School of Design. Hebert has been a fellow at the Fine Arts Work Center, Provincetown, Massachusetts, and the Core Program, Glassell School of Art, Houston, Texas. Exhibiting his work nationally and internationally, he is represented by the Devin Borden Gallery in Houston and the Ameringer | McEnery | Yohe Gallery in New York City. He is currently an Assistant Professor in the Department of Art & Design at UND.

The print relates to a campus-wide plan called the “Living Art Museum.” The concept behind this plan stresses the idea of “relevancy” regarding what is selected for display—as it relates to the concerns of people who are normally present in spaces where the art is placed. With this concept in mind, the artwork relates to the issue of recent digital technologies that are available to “scale up” processes utilized in contemporary printmaking.