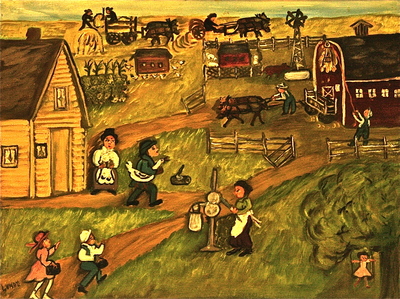 Emily Lunde was a self-taught artist who first received national attention in the 1970s when art authorities (such as Robert Bishop, Director of the Museum of American Folk Art in New York City) took notice of her paintings. Much of her art was a form of “memory painting,” similar in spirit to the art of Grandma Moses, in which Lunde recalled her earlier life experiences in northern Minnesota. In her later years, Lunde lived in North Dakota, where she continued to document rural subjects.

Emily Lunde was born on a farm in Newfolden, Minnesota, but lived in Grand Forks, North Dakota, from 1942 onward. A self-taught artist, she did not begin painting until the 1950s. The subjects of her paintings recall early life experiences during the 1920s and 1930s. Lunde's painting style and nostalgic rural subjects are evocative of works by Anna Mary Robertson Moses (1860-1961), who was better known as 'Grandma Moses'.

Lunde achieved national recognition as a "memory painter" during the 1970s when her paintings were featured in books on American folk painting. Lunde's work is also included in the collection of the American Folk Art Museum in New York City