Target (from For Meyer Schapiro: A portfolio of twelve signed prints by twelve artists) 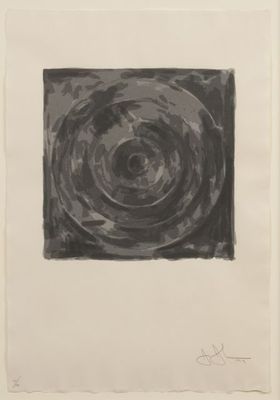 Jasper Johns is an important American artist, who was associated with an art movement that is called neo-dada. During the 1950s his art often incorporated found objects.

Jasper Johns was interested in fusing art with popular culture. To achieve this objective, he produced series of paintings representing targets, the American flag, and other subjects appropriated from “real life.”

The artist introduced the subject of the target in his art beginning in the mid 1950s. One question that may arise when looking at Johns’ image is whether to perceived it as a representation (that is, as a picture of an actual target) or as a pure abstraction consisting of overlapped circles.