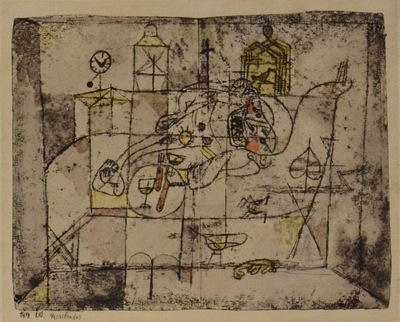 Paul Klee was born in Münchenbuchsee, Switzerland. As a child, he studied music and showed great skill as a violinist. In his teen years, his focus shifted to visual art and, in 1898, Klee moved to Munich, Germany to study at the Academy of Fine Arts.

In 1916, Klee was drafted to the German army, where he painted camouflage on airplanes and worked as a clerk. Two years later, Klee was released from duty and returned to his home in Munich. During World War I, he experienced the loss of his friends, Auguste Macke and Franz Marc. Klee’s work greatly evolved during the war, creating several pen-and-ink lithographs in response to his loss. An example of this work may be seen in this lithograph. The title of this piece, Moribundus, is Latin meaning “at the point of death.”