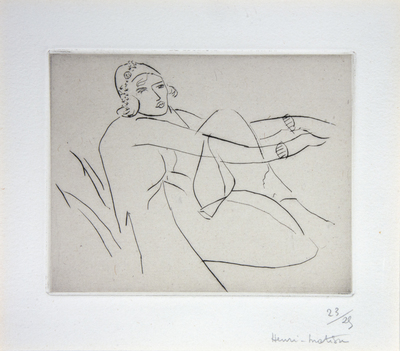 Henri Matisse was the leading painter in the Fauve movement. As a French Expressionist, he was driven more by feelings of joy in the act of making art, rather than by angst. In his elegant drypoint, the artist displays a refined use of line to achieve a sense of harmony between two-dimensional and three-dimensional qualities. Matisse employs an economy of means in the use of line to suggest the delicately foreshortened clothed human figure.

Best known for his Fauvist style, French expressionist Henri Matisse became one of the most influential artists of the 20th century through his revolutionary use of expressive color and exaggerated form to express emotion in his artworks.

Le Bonnet Fleuri is a small scale work, a drypoint on Chine applique on Arches Velin paper, with only 25 replicas. A portrait of a clothed woman is presented through Matisse’s polished use of lines that elegantly unifies two-dimensional and three-dimensional traits.

Included in 'Art Across the Ages: A Selection of Treasured Works'