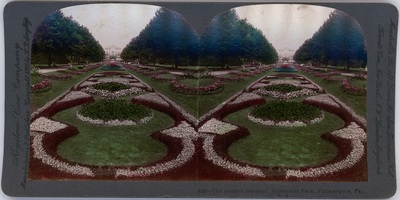 Fairmount Park almost takes the first place among the finest and largest parks in the world. acres, from Fairmount on the Schuylkill to Chestnut Hill, 14 miles away on the Wissahickon. The Park is on both sides of the Schuylkill, and about equally distant from the northern and southern boundaries of the city. Since 1870 the Fairmount Park Art Association has adorned the Park with many splendid sculptures. Among these are the Garfield Memorial by St. Gaudens, the heroic bronze equestrian statue of General Grant by French änd Potter, the Dying Lioness by Wolff. Fremiet's Joan of Are, and original works by Calder, Boyle and many others. The first land purchased of the Indians within the boundaries of Philadelphia is, included in this Park. Penn was attracted by the grounds and thought of making Fairmount his residence. No piece of ground in the United States had closer connection with the historic men of the Revolution. This Park was the site of the Centennial Exposition of 1876. Memorial Hall was erected by the State and the City at justly proud of their splendid, beautiful park with buildings, statuary and gardens unsurpassed in any park in the world. Copyright 1905 by Keystone View Company,