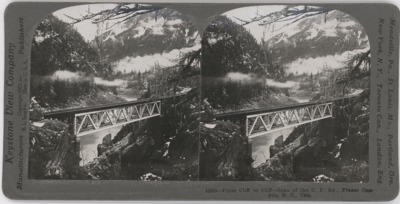 Black and white photo of a railway bridge above a river. Behind the bridge snowy mountains and trees are visible.

Text on front below image:

Gold in the bed of the Fraser River brought thousands of miners to British Columbia in 1856 and following years. Gold made the province important and caused its being made a province of Canada. Gold was readily found in the beds of the Fraser, the Thompson and the Peace rivers and their tributaries. Gold diggers from Australia, from California, from everywhere - Americans, British, Mexican, Chinese - rushed in. Ordered government and civilization followed. The river beds have been abandoned to Chinese gold-seekers, who make perhaps half a dollar a day. But mining has grown to be a great and profitable industry, the gold output of British Columbia in 1900 exceeding $4,700,000. The gold-bearing ores yield also silver and lead; the silver output of 1900 reached $2,400,000. Copper mines yielded $1,600,000 and coal was mined worth $4,300,000 in 1900. The salmon fisheries, which are most extensive on the Fraser, yield $4,000,000 a year, and other fisheries more than $1,000,000.