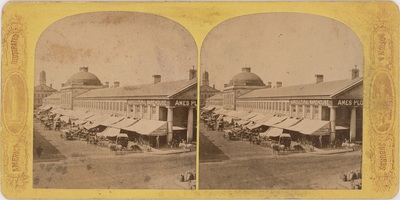 Text printed on back of slide:

Is situated at the east end of Faneuil Hall, between two streets called North and South Market streets. North Market Street is sixty-five feet wide, and has a range of stores four stories high, with granite fronts; the range is 530 feet long and 55 feet deep.

South Market Street is one hundred and two feet wide, and has a range of stores similar to the above five hundred and thirty feet long and sixty-five feet deep.

The ground for the market was staked out Aug. 20, 1824, the corner stone was laid April 17, 1825, at which time the population of the city was estimated at fifty thousand. In length the market is 586 ft., 9 in.; in width 50ft., and is built entirely of granite. In the centre is a building seventy-four and a half by fifty-five feet, with projecting north and south fronts. At the east and west ends of the building are porticos which form the main entrances. The corridor is twelve feet in width.

The interior is divided into one hundred and twenty-eight stalls, in which are sold various kinds of meat, butter, cheese, vegetables, fruit and fish.

Quincy Hall is over the centre of the market, and is seventy feet by fifty, crowned by a dome. This hall is used in connection with the second story of the market and Faneuil Hall, for the Fairs of the Massachusetts Mechanics' Charitable Association, which are held about once in three years.

Written on back in pencil:

Along front, left side: America Illustrated

Along front, right side: Boston & Suburbs

A long building with awnings along its length. The building has a sign with the text AGRICULTURAL WAREHOUSE. visible on one side and AMES PLO on the other. Many carts and horse-drawn carriages are congregated along around the awnings.