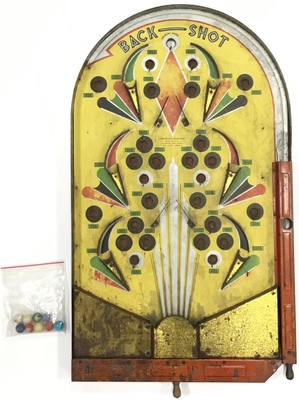 Lindstrom Corp created the Back-shot Pinball machine in 1933. Beginning in 1932, Lindstrom Corp released 22 different machines under the tradename. Back-shot Pinball is a skill-based ball-dropping game that is dependent upon gravity. During this era of Pinball, the machines were made of wooden legs and wooden rails on the machine’s side. Their popularity grew in the 1930s in response to the Great Depression and the need for low-cost entertainment for the population.Yellow, red, black and green pinball machine with marbles

In response to the Great Depression in the 1930s and the need for a form of low-cost entertainment, the popularity of the Pinball game quickly grew. The Back-Shot Pinball machine was created in 1933 by the Lindstrom Corp. The Lindstrom Corp produced mechanical toys, games, and phonographs made of pressed-steel and tin. The company produced these toys from 1913 until the early 1940s. After World War II the company resumed production of these toys, games, and phonographs. The pinball game is a skill-based ball-dropping game that is dependent upon gravity.

James Smith Pierce was an accomplished historian and artist who obtained his PhD in art history from Harvard University. Many of Pierce’s artworks were included in important exhibitions and art books. He was not only an artist, but also a professor, photographer, curator, art historian, and art collector. Pierce would often collect “found objects” that represented various eras of time he found intriguing or interesting, including this pinball game.