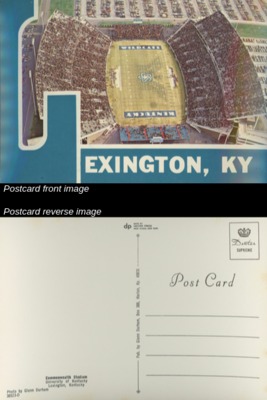 Commonwealth Stadium, as it was formerly known, is in Lexington, Kentucky on the campus of the University of Kentucky. Its purpose serves as the homefield for the Kentucky Wildcats football team. The playing surface is named C.M. Newton Grounds in memory of the retired UK athletic director and former baseball/basketball player C.M Newton. The stadium, built in 1973, was the newest football stadium in the Southeastern Conference according to the date of original construction. The stadium went through a name change and is now known as Kroger Field.

Postcard depicts an overhead photograph of the Commonwealth Stadium in Lexington Kentucky. At the bottom it states, "Lexington, KY' in white on a blue border, with a large L.