Stereoscope Slide, Jerusalem, "The City of Zion" - from the Mt. of Olives, Palestine 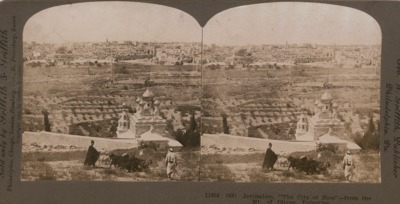 Black and white photo of two men herding goats. In the distance a city is visible.

Sold only by Griffith & Griffith

From our point of view the entire city within the walis lies beneath our gaze with its richness of interest, Biblical, historical, topographical, and archeological. The eye can follow the entire course of the encompassing walls. One of the most prominent features is the beautiful Come of he Roc, or Mosque of Omar, supposed to occupy the Temple site, and the great level enclosure of the Temple Area covering about 35 acres in the southeast corner of the Holy City, about one-fifth of the entire space within the walls. In the centre of the city the domes of the Church of the Sepulchre and the tower of the New German Church, together with the lofty minaret of one of the Moslem mosques, are seen in close prox- mity. On Zion the domes of the two largest of the many Jewish synagogues are conspicuous, as is also David's Tower Damascus Gate on the north to the Dung Cate on the south extends the well-mark d Tyropean Valley dividing Moriah and Bezetha on the east. from Zion and Acre on the west, these being the four mountains on which the city is built. Of the two deep valleys which bound Jerusalem on two sides, that of Hinnom on the south is not in sight, but our view shows the Valley of Jehoshaphat on the east of the city. The sad and unique history of Jerusalem can scarcely be touched upon in our limited space. It has sustained twenty-seven sieges and be destroyed seventeen times. near the Jaffa Gate. From the It has passed from hand to hand. Jewish, Christian, Moslem, like a ball to sed to and its story of overthrow and desolation is written in the blood of its sons, and may be read in the light of its own flames. One of the most pathetic sight in the world may be seen any Friday when as the Sabbath draws near, crowds of Jews gather under the walls of their ancient temple area to wet its ones with their tears and pour out their nrayers. For the restoration of their temple and worship.