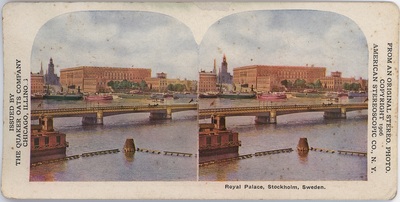 Photo of a bridge crossing a body of water. In the background is a dock and a large building.

FROM AN ORIGINAL STEREO. PHOTO.

Tours to all parts of the world. Save these colored stereoscopic views from Pettijohn packages; arrange them into series and shortly you will have a library of World Tours of Original Views of immense interest, instructive, interesting and entertaining.

Such a collection or library of views is a great education for children. list of subjects in four series. These will be followed by other tours through different countries.

In the Market, Killarney, Ireland.

Castle Soonick on the Rhine, Germany.

One of the famous Island Gardens of Stockholm, Sweden.

A mountain road in Norway.

The Canal of Gothenberg, Sweden.

Going to Church in Sweden.

The Palace of the Vatican, Rome.

In the great Art Galleries of the Vatican, Rome.

Throne Room of the Vatican, Rome.

A section in the library of the Vatican.

Pope Pius X speaking in the Court of the Vatican, Rome.