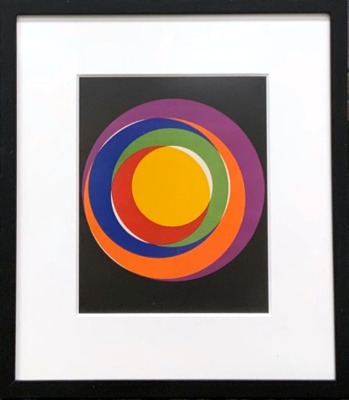 Max Bill was an architect, painter, industrial designer, and graphic designer born in 1908 in Winterthur, Switzerland. Bill first trained as a silversmith at the Zurich School of Applied Art from 1924 to 1927 until he went on to study at the Bauhaus from 1927 to 1929. Max Bill is best known for his concrete art methods, which center on geometric abstraction, that sought to present the viewers with a visual representation of the new sciences that were emerging in the early 20th century. Max Bill has work in the permanent collections of the Modern Museum of Art, the Art Institute of Chicago, and several others.

The work of constructivist Max Bill reflects his passion for mathematical formulas. A student of the Bauhaus for two years, he studied under such artists as Paul Klee, Wassily Kandinsky, and Josef Albers. His connection to Paris is through those artists, and in 1932 he became a member of the Paris-based abstract-creation group.

Max Bill created Variation 13 for the fourth issue of the Paris art magazine XXe Siècle. Bill is most well known for starting the Concrete Art Movement, his architecture and graphic design, most of which followed more modern and industrial styles.

Variation 13 was created during Bill’s ‘Variation Period’. Most of his works from this time feature a similar mix of either bright colors or black and white geometric shapes on plain backgrounds.

Artist Max Bill is well known for his interests in the maths and sciences, which is demonstrated through his abstract geometric creations. Bill was knowledgeable in many areas, such as architecture and industrial design, all of which contributed to his role in creating the Concrete Art Movement. His architectural and graphic design skills are clearly represented throughout his artworks, which have been featured in several collections across the country. Bill’s former work as a silversmith is demonstrated through his precision in each work.

In Variation 13 a rainbow of colors is featured in circular patterns, inviting the viewer in closer for a better look. The artist's passion for mathematics allowed him to create interesting and precise pieces.