Two Fauns Carrying a Child in a Basket 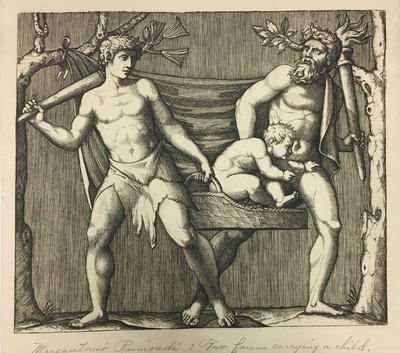 (Charles) Amand Durand was an established and reputable French engraver who lived from 1831-1905. He dedicated most of his adult life to recreating the early etching plates created by the Masters such as Rembrandt. His etchings are based on research and studies he did in museums and private collections, and his work is considered to be incredibly accurate. His work varies in value depending on the piece and is known to have been purchased by major European collectors, the Louvre, and the French Biblioteque Nationale.

Marcantonio Raimondi was an Italian artist amongst the peers that formed the Little Masters movement that followed Durer's influence.

This work was created by Amand Durand after Raimondi.