To Jim His Favorite Subject 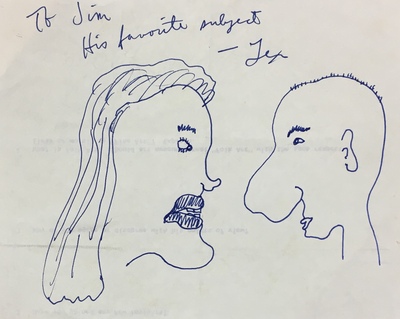 From the obituary that was published in the Owensboro Messenger-Inquirer shortly after Shipley's death on July 7, 1993:

Former Owensboro artist Erwin Lex Shipley, whose work is represented in a number of public and private collections throughout the region, died Wednesday, July 7, 1993, at the Veteran’s Administration Medical Center in Lexington. He was 68.

He was born in Brewston Mills, W.Va. and was the son of the late Samuel Maynard Shipley and Leona Underwood Shipley. He was a primitive artist, a Navy veteran and was affiliated with the Christ Church Episcopal. Survivors include two brothers, Charles Shipley of Lexington and Wray Shipley of Owensboro. Burial was in Camp Nelson National Cemetery in Nicholasville.

Shipley’s works are part of the Owensboro Museum of Fine Art’s permanent collection, the city of Owensboro’s municipal collection and many public and private collections throughout the nation.

“When he lived here he was quite a prolific painter,” said Mary Bryan Hood, director of the Owensboro Museum of Fine Art. “He was a highly creative and expressionistic painter.” Hood said Shipley was “dedicated to the visual arts, not only to his own work but to the general growth and development of the arts.”

Local artist Rex Robinson said Shipley was “remarkably talented” and went through several phases as an artist. “He was always searching for a fresh expression that fit the subject and content. He’ll be missed. I think everyone will remember him for his great attitude and his openness and kindness.”

"To Jim His favorite subject -Lex" inscribed on work by artist. Jim refers to James Smith Pierce, a friend of the artist.

On reverse side of torn folk art questionnaire