The IDLE 'PRENTICE Executed at Tyburn 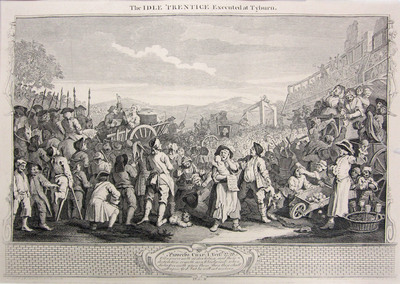 William Hogarth was an English artist born in 1697 in London. Hogarth became a silversmith apprentice at an early age but became frustrated with the poor instruction and later moved on to study at a private drawing school in St. Martin's Lane. He is best known for his"modern moral subjects," or small portrait series that involved a great degree of satirical remarks about political and contemporary customs. Works by Hogarth can be found in the permanent collections of the Tate Museum, the National Gallery of Art and many others internationally.

William Hogarth’s prints comment on the social upheaval that English society experienced in the eighteenth century. In Industry and Idleness, Hogarth offers a moralizing tale supporting hard work as the means to get ahead. The series follows the exploits of two young workers—while the industrious apprentice would prosper and become the Lord Mayor of London, his idle friend would turn to a life of crime, culminating in the scene depicted here.

Displayed in Daumier Encore Exhibition at the Empire Arts Center, 2016