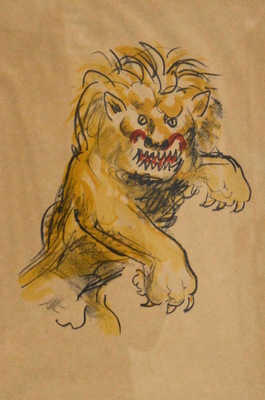 Kees van Dongen was born in 1877 in Delfshaven. He studied at the Academy of Rotterdam but never finished his education. He turned towards illustrating magazines instead and in 1897 he went to Paris to work as an illustrator for "Revoue Blanche" and "L'assiette au Beurre." Van Dongen is best known for being associated with the "Fauves" (wild beasts), his admiration for Expressionism in his works, and his intense use of color. Works by Kees van Dongen can be found in the permanent collections of the Van Gogh Museum, the Museum of Modern Art, the National Museum of Modern and Contemporary Art,, the San Francisco Museum of Modern Art, and the University of North Dakota Art Collections.

This lithograph is part of a series illustrating The Princess of Babylon, a story by the enlightenment philosopher, Voltaire. In the story, suitors of the princess must defeat the lion in order to prove their worthiness to her father, the king. The lion as a symbol of strength and dominance is not unique to this story, of course. Often revered as “king of the jungle”, the lion’s prowess and regality is a symbol utilized in art and literature around the world.

A renowned expressionist painter in the early twentieth century, Kees van Dongen is perhaps best known for his vivid portraiture work. However, he was drawn to exotic subjects and emotionally-intense imagery—both clearly evident in this dramatic depiction of a charging lion.

Acquired as part of the James Smith Pierce Collection.

Hinges with residue on all four sides. Darkening or bleaching from exposure to sun or artificial light.