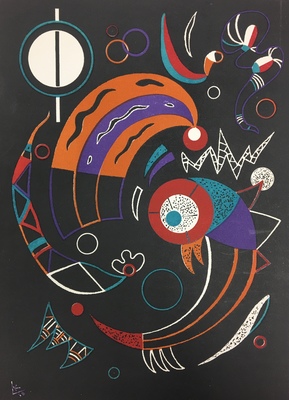 Kandinsky created Comets in 1938 for Verve Magazine. During this time Kandinsky had fled Germany after a Nazi smear campaign against the art school he was teaching at called Bauhaus. While in Paris Kandinsky began to feel increasingly isolated and underwent a noticeable shift in his art style.

His work began to express more biomorphic shapes and elements and take on softer tones. During this time many of his works often convey a more peaceful, listless tone.

Text and additional lithography verso. Created for Verve Magazine in 1938.