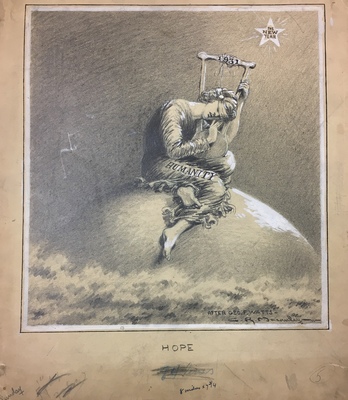 Charles Raymond Macauley was a freelance cartoonist and illustrator born in 1871 in Canton, Ohio. Macauley drew political cartoons for many Ohio based newspapers before moving on to New York newspapers, and eventually winning a Pulitzer Prize in 1930. Besides his political cartoons, he is best known for his illustrated novels that he wrote, and early screenplays.

The original 'Hope' painting was created by George Frederic Watts (English, 1817-1904). This work was created by American political cartoonist Charles R. Macauley. In the work, he appropriates Watts' original concept and makes it relevant to his own time period by adding text on the ladder and female. "1931" and "Humanity". After the stock market crash of 1929, Americans experienced widespread poverty and unemployment during what is called The Great Depression. This work is likely representative of the artist's hopes for the nation's recovery, which wouldn't happen for nearly a decade.

Top right, bottom left and right - dog eared, Tears: 2 of right edge and left edge. Darkening or bleaching from prolonged exposured to ultraviolet and/or heat from sun or artificial light. Folds and bedning of right side.