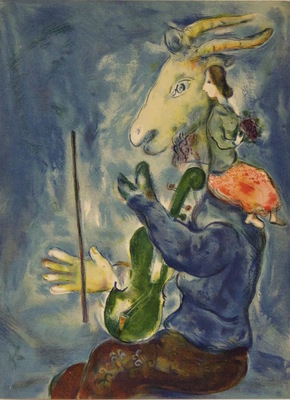 Marc Chagall was born in 1887 in Belarus. Chagall’s works took inspiration from Biblical stories and Hassidic culture. During this time period, Chagall’s works began to more prominently feature depictions of Jewish life, especially in conjunction with events at the time. Marc Chagall's work can be seen at the Museum of Modern Art, the Art Institute of Chicago, and many other collections internationally.

1938 also saw the creation of one of Chagall’s most famous works- White Crucifixion.

'Le Printemps' was part of a commissioned series of lithographs by Paris-based Verve magazine' in 1938. Additional lithography related to the work on verso.

Verve was a Parisian art magazine published from 1937 to 1960. Its publisher and editor, E. Teriade, wanted his magazine to be a place for artists to realize themselves fully. The magazine featured artwork from artists such as Picasso, Matisse, Klee, Miro and Kandinsky. Intertwined with the artwork were other visual works and writings. Excerpts from essays by writers like Camus, Malraux, and Gide, old manuscripts and photographs, and anything else Teriade found appealing were included in the publications. Overall, the magazine was not just a collection of artworks, but the 38 publications were all conceived as works of art themselves. The prints included in the publications are now in collections of major art institutions around the world.