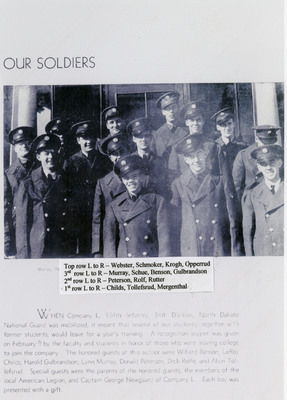 This image was printed on photo quality paper and concerns Company L of the 164th Infantry Regiment. "When Company L, 164th Infantry, 34th Division, North Dakota National Guard was mobilized it meant that several of our students, together with former students, would leave for a year's training. A recognition supper was given on February 9 by the faculty and students in honor of those who were leaving college to join the company. The honored guests at the supper were Willard Benson, LeRoy Childs, Harold Gulbrandson, Lynn Murray, Donald Peterson, Dick Rolfe, and Alvin Tollefsrud. Special guests were the parents of the honored guests, the members of the American Legion, and Captain George Newgaard of Company L. Each boy was presented with a gift."