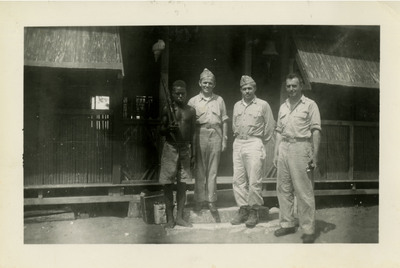 Colonel Art Timboe (third from the left) poses with two unidentified members of the 164th Infantry Regiment and one Guadalcanal native, whom is holding a rifle. A native of Devils Lake, North Dakota, Colonel Arthur Timboe (1907-1996) served in the 164th Infantry Regiment in World War II and as a Public Information Officer for the Korean Communication Zone during the Korean War.