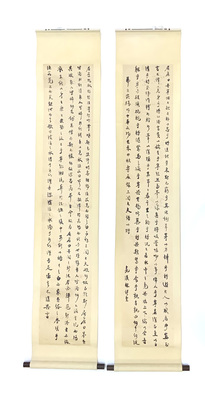 Lin Yutang (1895-1976), a Chinese writer, translator and inventor, was nominated for the Nobel Prize in Literature in 1940 and 1950. His best-known books included My Country and My People and The Importance of Living, as well as novels Moment in Peking and The Vermilion Gate.

The pair of Chinese calligraphy scrolls was a birthday preset for Chester Fritz, written and given by Lin Yutang in 1932. The text of the scrolls was the poetry of "Fisherman" by the 4th century BCE poet, Qu Yuan.

Twice nominated by Pearl Buck for a Nobel Prize, Lin Yutang was a well-known Chinese writer. in 1932, Lin executed the pair of calligraphy scrolls as a birthday present for Chester Fritz (1892-1983), who was a long-time resident in Shanghai, China.

University records from 1979 indicate that at least one of the scrolls had "cracks and damages" and later the condition of the scrolls worsened. For that reason, in 2013, UND Associate Professor Crystal Yang investigated the possibility of resorting them. Subsequently, Director of Libraries Wilbur Stolt authorized Yang to take them to a conservation institute in Shanghai, where they recently underwent professional restoration.