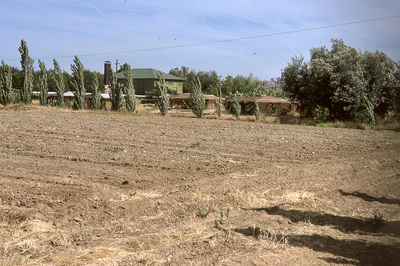 Baldassare Forestiere was born on June 8, 1879 in the Filari, Sicily. He immigrated to the United States in 1901 with the dream of becoming a citrus farmer and moved to Fresno, California. He began work on the underground gardens in 1906 to escape the heat. He never wrote down any of his plans and would dig into the hardpan sedimentary rock with pickaxes and shovels. Many of the tunnels were modeled after Roman catacombs Forestiere had seen as a boy in Sicily. Forestiere continued to work on the tunnels and gardens for the next forty years until his death in 1946. He was quoted as saying “To make something with a lot of money, that is easy; but to make something out of nothing - now that is something.”

After Baldassare’s death, care of the gardens fell to his brother Giuseppe, who would later pass on this duty to his children and future grandchildren. The site was designated a California Historic Landmark in 1979 and is currently on the National Register of Historic Places. The gardens have been featured in the New York Times and the Los Angeles Times, as well as various other magazines, podcasts, and TV shows.

The tunnels consist of three levels and 65 rooms, including two bedrooms, a bathroom, a functional kitchen, and several other living spaces. The garden portions contain several drainage pools and skylights as well as a variety of fruit trees and grape vines, some of which are over one hundred years old. The gardens are currently open for tours.