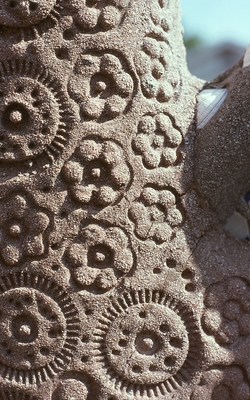 Sabato “Simon” Rodia was born on February 12, 1879 in Southern Italy. Rodia lived in Italy until the age of 15, when he immigrated to America with his brother. Rodia lived with his brother in Pennsylvania until he died in a mining accident. Rodia then moved to Seattle and married Lucia Ucci in 1902, with whom he had three children. He would go on to marry and subsequently divorce a total of three times in his life. Rodia moved to several different locations along the west coast before settling in the neighborhood of Watts in Los Angeles.

Rodia acquired a small triangular piece of land on which he lived in a small cottage. He was quoted as saying he wanted to “do something big” and thus began construction of several large, spiral shaped sculptures within his property. These would later become known as the Watts Towers. Rodia worked without the use of scaffolding, building the towers one level at a time. The towers were constructed with amatuer building methods such as the use of chicken wire and mesh. Joints were built without welding, bolts, or rivets. During their construction, the towers were often vandalized by neighbors. Rodia would work on these towers for the next three decades before declaring them complete in 1954.

Several times over the duration of their construction, the towers came under suspicion from the general public, who spread rumors that they actually held a more nefarious purpose. Dejected by these rumors, Rodia eventually sold his property and the towers and moved to Martinez until his death in 1965. Controversy later arose over the decision to either restore the sculptures or dismantle them. The city of Los Angeles would eventually declare that if Watts Towers could appropriately withstand stress testing, they would be allowed to remain. Upon passing, the Watts Towers were restored and are now on the National Register of Historic Places under ownership of the state of California.