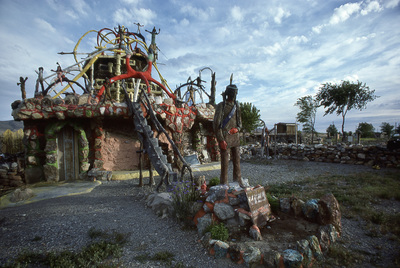 Frank Van Zandt was born in Oklahoma in 1920. He held that he was 1/4 Creek Indian, and eventually adopted the Creek tribal name Chief Rolling Mountain Thunder (1920-1989). He had many occupations prior to moving to Thunder Mountain. He fought in WWII, worked as a deputy sheriff, was an assistant pastor of a Methodist church, a private investigator, a cab driver, a gold miner, and a sculptor. This all changed in 1968 when he founded what would become known as Thunder Mountain, an odd assortment of buildings and sculptures off Interstate 80.

The stories of how and why he founded Thunder Mountain are varied, indeed he often gave conflicting reports. He claimed that an old medicine woman told him that only those who lived at Thunder Mountain would survive the end of days. He also claimed to have had a prophetic dream in which a large eagle told him to make his nest at Thunder Mountain. It is said that he found the land after randomly pulling off of the interstate. He squatted on the property initially before purchasing the site.

After he purchased the land, he got to work. He incorporated found objects from the surrounding area. Cars, bottles, bedsprings, anything was fair game. He was assisted in his endeavors by various hippies and outsiders who stopped in. His intention was to make a monument to Native Americans to help raise awareness of their plight.

In 1983, a fire wiped out most of the buildings. He received a Governor's Art Award in 1983. In 1989 he committed suicide. Thunder Mountain was added to the Nevada State Register of Historic Places in 1992. His son Dan now owns and manages the site.