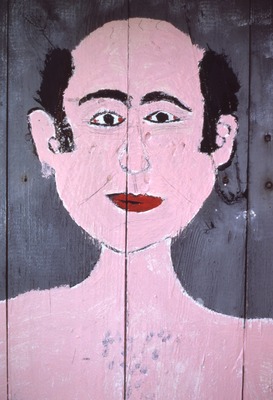 Very little information exists in regards to Loranzo Dow Pugh. It is known that he was born in 1906 in Putnam County, Tennessee. He moved to Battle Creek, Michigan and worked with machinery in the early 1930s. By 1935 he was back in Tennessee, having moved to the town of Monterey, where he would remain for the rest of his life.

"I just can't sit down without something to whittle on. I'm what you call a jack-of-all-trades and good for nothing." said Pugh in describing himself. It is unknown when Pugh began creating the folk art for which he became known. He worked primarily in carving, although one of his more famous works, the ham can banjo, was created using found objects. Pugh handed out business cards to people which read: “Loranzo Dow Pugh, retired; Indian, Snake and Gourd Man; Monterey, Tenn.”

His home was covered in paintings, sculptures, and Native American artifacts. Some of his work featured masonic symbolism; whether Pugh was a mason or not is unclear. He often carved furniture including a table which is supported by a realistically carved hand, as well as a chair carved and painted to resemble a lion. Pugh died in 1993. There is little information as to the whereabouts of his surviving work with the exception of some carvings that are currently be in private collections.