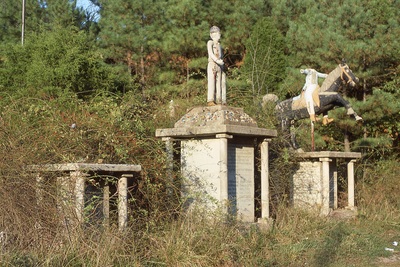 Enoch Tanner (E.T.)Wickham was born in 1882. He spent his life as a tobacco farmer and family man, raising 9 children. Upon retiring, he built a cabin in Palmyra, Tennessee and relocated there from his farm. He began sculpting at the age of 67, and although he got a late start in life, would go on to sculpt for 20 more years.

Wickham’s statues are created from rebar, chicken wire, and concrete. Most of his works depict historical figures or commemorate historical events, although some, including his first sculpture, are religious. Most of his statues incorporated a large pedestal which bore an inscription describing the subject of the work. He created statues of John F. Kennedy, Daniel Boone, Sitting Bull, and a large horse bound Andrew Jackson.

Wickham did receive minor recognition during his life for some of his work. In 1959, the state senator spoke at the unveiling of a WWII memorial created by Wickham. The memorial was meant to honor Wickham’s son, as well as the other soldiers from the region who had died in WWII.

Wickham died in 1970 at the age of 87 after a prolific 20 years of sculpting. Unfortunately, his art did not garner enough recognition for preservation efforts after his death, and most of his statues were vandalized, either through graffiti or destruction. Most of the statues have been completely destroyed, but the headless remains of a few still dot the site.

Some of his smaller works were preserved by Austin Peay State University. One of his statues resides in the Wickham plot at a nearby cemetery, and there is a statue of a soldier created by Wickham in the chapel at Fort Campbell, a nearby Army base.