Stations of the Cross Detail 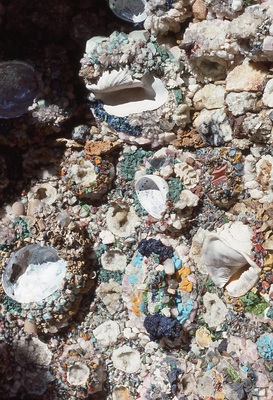 Paul Dobberstein was born in 1872 in Rosenfeld Germany. He would immigrate to the United States at the age of 20 to begin studying at the Saint Mary Seminary in Milwaukee, Wisconsin. While there, Dobberstein came down with pneumonia, and made a holy promise that should he recover, he would construct a shrine to the Virgin Mary. Dobberstein recovered from his illness, and became ordained in 1897. In 1898, he was sent to minister a church in West Bend, Iowa.

Although he did not start work on his shrine immediately, he began collecting rocks that would ultimately comprise the work. In 1912, Dobberstein began work on the shrine proper. He frequently stayed up all night working. He worked without blueprints or a formal plan, and he worked completely by himself until 1947 when Reverend Louis Greving began assisting him. Through their efforts, what began as a humble shrine would go on to become the largest religious grotto in the world, eventually taking up almost an entire city block.

The grotto is primarily constructed of concrete and stone. The stones that make up the grotto are interesting and varied. They come from all over the country, with some even coming from abroad. Many of these stones were donated as contributions to the work. Dobberstein would construct a number of other grottos at various other locations, although none quite match the spectacle of his largest and most well-known work.

Father Dobberstein died in 1984. His grottos are maintained by various religious organizations and are open to the public.