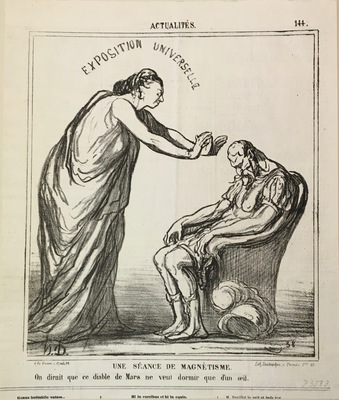 Here Daumier presents an allegory about political instability among nations in Europe. Mars, the god of war, is kept asleep through “animal magnetism” (which preceded hypnotism). Should Mars wake up, war will soon erupt.

In the field of medicine, animal magnetism (or mesmerism) was generally associated more with charlatans, than with honest physicians. Yet, some doctors experimented with it as alternate medicine. As hypnotism progressed through the 19th century, it increasingly gained respectability—when understood as being about the power of suggestion, rather than uncanny magnetic energy.