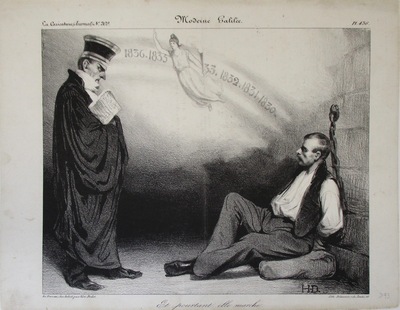 The lithograph targets Jean-Charles Persil, Minister of Justice under King Louis Phillippe, who Daumier viewed as a real-life villain. Persil is seen interrogating a political prisoner, who is chained in his cell because he favors republican causes. An allegorical representation of Liberty appears in the air above him.

The print’s title and its caption liken the political prisoner to Galileo Galilei (1564–1642), who after being forced to recant his claims that the Earth moves around the Sun (rather than the other way around), supposedly also said “and yet it moves.”