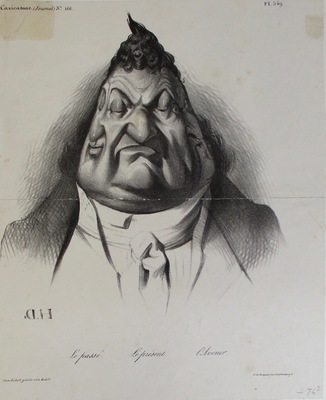 Although Daumier’s scathing caricature of King Louis Philippe as the giant Gargantua had led to the artist being briefly imprisoned in 1832, he continued to attack the king in his lithographs (that is, until the passage of hasher censorship laws would eventually stop him).

The pear-shaped head the 1834 lithograph echoes Louis Philippe’s pear-shaped body in Daumier’s other works from the same period. The king’s three faces progress in degrees of ugliness from left to right. The message is that his oppressive leadership gets worse as time goes on.