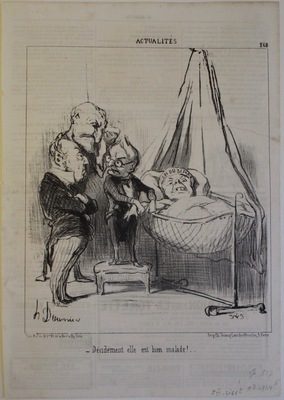 On May 31, 1850, the French National Assembly passed a law to end universal male suffrage, which had been put in place by the Second Republic Constitution in 1848.

Public reaction to the new law, which eliminated nearly a third of France’s eligible voters, led to violent protests that threatened to overturn it. Daumier portrays the law’s chief supporter, Marie Joseph Louis Adolphe Thiers (1797-1877), as a physician checking the pulse of a young girl who personifies the May 31 law.