Jack Stewart and the Camelback Inn 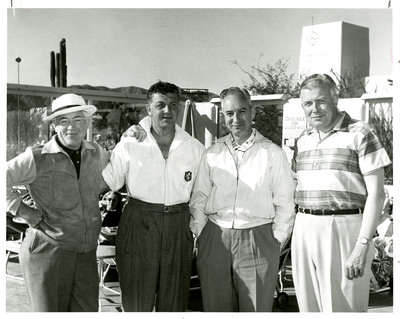 Photograph from a gathering at the Camelback Inn in Paradise Valley, Arizona. The Camelback Inn was founded in 1936 by UND alum Jack Stewart. The Inn catered to a wealthy clientele, including many Hollywood elites. Stewart caused an uproar on campus in 1967 by sponsoring a scholarship essay contest designed to promote patriotism.

Left to right in the photograph: Jack Stewart, Ed O'Connor (California), Dewey Balch (Minneapolis) and Armin Rohde (Grand Forks). Information from the back of the photograph.