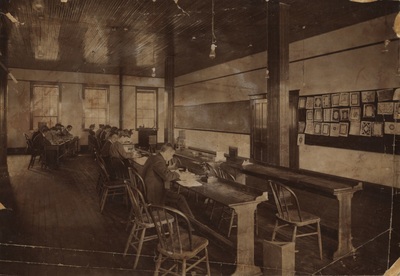 A class of both male and female students takes part in a drawing class in Old Science in 1903. The students sit in wooden chairs at long, wooden tables in rows with no instructor present.

Completed in 1901, Science Hall absorbed UND's museum and laboratories from Main. Science Hall originally held Engineering in the basement, Physics and Mathematics on first floor, Chemistry on second floor and Biology with the museum on the third floor. On September 26, 1905, the School of Medicine opened its doors and occupied portions of the building's second and third floors until 1948. After that, Science Hall provided a home for the Public Health Laboratory (1949-1973) and UND's radio station KFJM, besides other entities. After some debate it was decided that Old Science be razed in 1999 due to structural concerns.