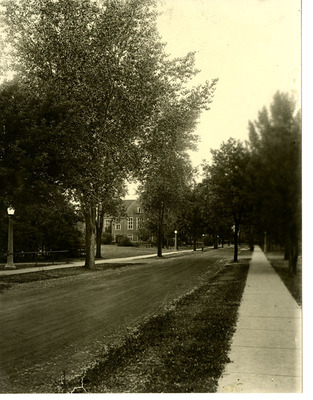 A view of Montgomery Hall from a nearby street. Montgomery Hall was built in 1911 in the Tudor Revival architectural style, under the administration of President Frank McVey (1909-1917). By 1929, the building was utilized as a library, as the Carnegie Library had outgrown its space. After construction of the Chester Fritz Library in 1961, Montgomery was used for various administrative purposes. As of 2019, plans are to demolish the building and construct a new College of Business and Public Administration on the location.