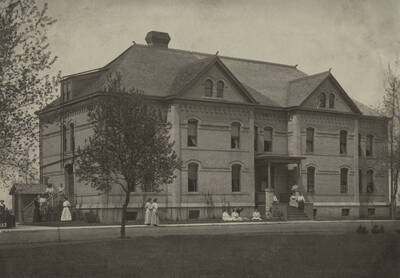 Macnie Hall photo, three female students stand by the side entrance in the grass and three on the steps, which was originally the front south entrance. Two female students walk on the sidewalk and four female students sit in the grass near the front entrance where a bicycle leans against the front steps. Four female students sit on the front step porch. The windows of the building are open and curtains can be seen. In 1907, the dormitory was enlarged by adding a north entrance, the entrance and front door were placed in the middle of its east side. Macnie Hall was constructed in 1893 as a men's dormitory several yards north of Davis Hall. Several small trees surround the building and a dirt path leads to its front. It was conceived and partially constructed as a university astronomical observatory but it was completed as a men's dormitory. In 1901, it became a woman's dormitory until 1930 when again housed male students. In 1908 it was renamed Macnie Hall in honor of John Macnie, professor of French and Spanish Languages and Literature and Secretary of the Faculty, who retired in 1906 after twenty years of service. Originally known as the Prep Building or Dormitory, it was called the Cottage in 1901 when it became the second campus women's dormitory.