"This is Follies" at the 1956 Flickertail Follies 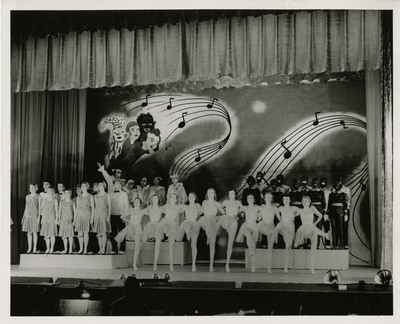 Kappa Alpha Theta and Beta Theta Pi perform "This is Follies" at the 1956 Flickertail Follies. According to the program: "Several aspects of Follies will be depicted, including the invitation to a sorority, the woes and dictatorial tendencies of the act managers, the budding of romance during Follies, and the typical Follies finale."

Established by Sigma Delta Chi, a national journalism society, the Flickertail Follies was a student talent and variety show from 1925 until 1962. The Follies were suspended from 1931 to 1935 due to the Great Depression and from 1941 to 1945 for the Second World War. The Follies gained national attention in 1950 when it was featured in "Life Magazine". The show ended in 1962 but was revitalized for one year in 1982.