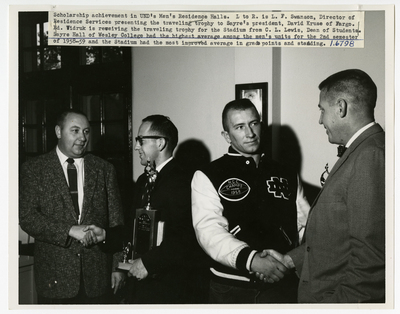 Scholarship achievement in UND's Men's Residence Halls. L to R. is Loren Swanson, Director of Residence Services presenting the traveling trophy to Sayre's president, David Kruse of Fargo. Ed Widruk is receiving the traveling trophy for the Stadium from C.L. Lewis, Dean of Students. Sayre Hall of Wesley College had the highest average among the men's units for the 2nd semester of 1958-59 and the Stadium had the most improved average in grade points and standing. Information taken from the front caption of the photograph.