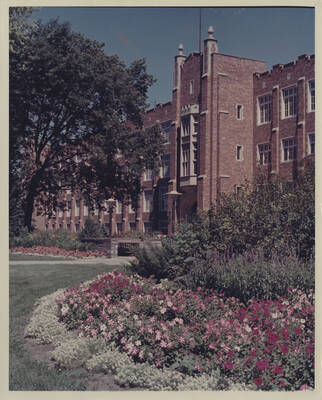 A photograph of Merrifield Hall surrounded by gardens. The Old Main Memorial Sphere is visible in the background. Old Main is visible in the background. UND began construction on the Liberal Arts Building in 1928, and students occupied it beginning September 1929. At the 1930 Founder's Day, the building was formally named Merrifield Hall. The building contained lecture rooms, recitation rooms, and department offices for the College of Arts. Prior to this, Old Main had also been known as Merrifield Hall from 1912-1930. (Information from Chandler's History of All Buildings, pg 24, and University Publications)